That’s right…our last show, “The Money-Guy Tax Plan”, sparked so many comments, we decided to do a follow-up…

In the time since we aired the last show, I have come across a couple of great articles  from The Wall Street Journal. The first was a letter to the editor from Anthony R. Palmer, M.D. Dr. Palmer,  clearly an intelligent man, wrote of his frustration regarding the current tax rates. To support his argument, he included some calculations that he made after the White House released the 2010 tax returns of the President and Vice President. Dr. Palmer calculated that the Obamas paid 26.6% of their income in taxes and that the Bidens paid 22.8% of their income in taxes. Considering that his income is substantially less than both the President’s and Vice President’s, he was irate to be paying a higher tax rate than they are, at 28%. What Dr. Palmer failed to realize, however, was that he was essentially comparing apples and oranges. The comparison of his marginal tax rate and their effective tax rates is simply not accurate or fair. I chose to pick on Dr. Palmer a little bit this week in order to illustrate that if an educated, intelligent doctor is able to make such a mistake, imagine how confused the average person is about the tax code. This supports the Money-Guy Tax Plan thought that we definitely need to simplify.

The other article, Where the Tax Money Is, takes an in-depth look at where the majority of taxable income actually comes from. The easiest illustration of the point this article makes is the chart below: 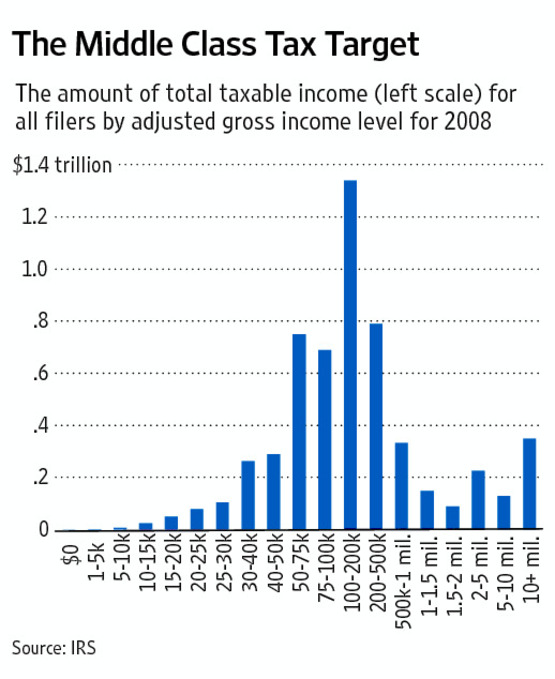 The research shows that simply increasing taxes on the wealthy is not going to solve all of our problems, despite popular belief. In fact, if we were to take the top 1% of taxpayers (those earning over $380,000) and seize 100% of their taxable income, we would generate less than a quarter of our annual budget. Again, if we took all the income of the top 5% (those earning over $200,000), we would only generate enough to cover Medicare, Medicaid, and Social Security. In a nutshell, the rich alone aren’t nearly rich enough to cover our current budget. This is not an income issue; it appears to be more of a spending problem.

The capital gains reform I proposed in the last show would provide a substantial increase in taxes collected but still maintains the stimulative nature of investing by providing a lower rate than ordinary income tax. This week, I took the illustration one step further to see how much additional income could actually be generated if we made my proposed change. Raising the rate for those making under $75,000 from 0 to 10% would generate an extra $22 billion. Raising the rate for those with higher income from 15% to 20% would generate an extra $98 billion. Using the 2008 numbers, that’s an extra $120 billion total in tax revenue.  This does not even take dividend tax rates into consideration…

Because we got so much great feedback from The Money-Guy Tax Plan, we close this week’s show by reading and responding to some of your comments and questions. We love hearing your thoughts, good or bad, and hope you continue to let us know what you think and how you feel. Our goal is simply to get the conversation started.

On that note… remember to check us out on Facebook. Our hope is that this Facebook page will allow us to stay in touch more frequently than every two weeks. Thanks, again, for all of your wonderful feedback!